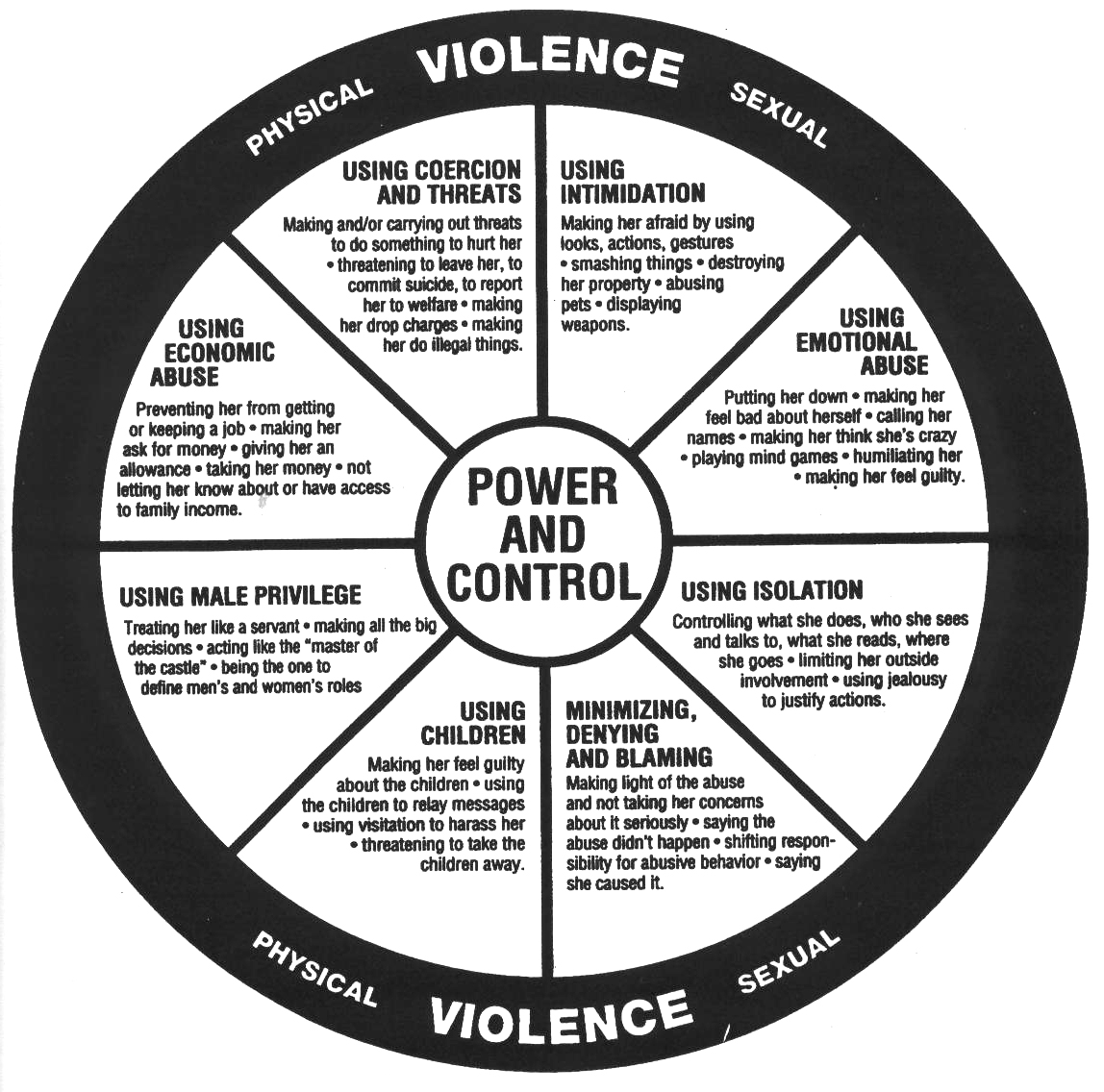 Domestic abuse is all about power and control. It is the very nucleus and heartbeat of an abuser. Intimidation, coercion, threats, isolation, emotional and economic abuse is all part of the power and control that is at the core of domestic abuse. Mindfully read every section of the pie on this Power and Control Wheel. Are there any pieces of this pie that are being fed to you by your spouse or partner, or ex-spouse or ex-partner?

If you can resonate with even just one section, it can be the start of a path filled with domestic abuse. ultimately you will lose all power and control. Conversely, if most or all of these sections are your current experience, know that you have the power within to claim your Self back. Absolute love in all areas of life from this moment forward can be your new experience. Love is our birthright. Choose love as your new reality. I urge you to pick up a copy of “Truth To Triumph” and read it. Use it as a guide.

Abuse will become frequent because the abuser is so conditioned to this behavior that they see it as normal and permitted. Moreover, they make light of the abuse. A perpetrator of domestic abuse will dismiss your concerns, and actually, say that the abuse didn’t happen. They lie and believe their own lies. They are completely out of their mind.  No one in a conscious state of mind would behave in such a manner. It’s impossible. Understanding this, however, does not free you. It allows you to forgive, but you will need to take action toward your freedom. Sometimes you will need to tell an unconscious person to back off, under no uncertain terms, and run for your life. The time is now to bridge the gap between suffering and peace.

If any of this rings true to your current experiences, then you need an exit plan. You need it now. Know that there is no end of the tunnel. The time is now. There is no promise of tomorrow. Trust in today. Tomorrow, you or your loved one may be dead. Say no to domestic abuse and claim your power and control back.

You have the innate ability to chose the creations you wish to experience. You can chose love. Domestic abuse is not love. To live in love is not only your birthright but that of your children’s as well. It is your responsibility as parents to teach your children love through experience, and to make them feel safe and protected. Additionally, you don’t want your children to grow up thinking this behavior is normal or okay. It’s not okay. The goal is to break the mold so that these patterns don’t resurface in their adult lives. Listen to your inner voice, and choose the to experience love, which will always bring you back to grace and dignity.

Reach out to me. I can pull you through the gap between where you are today, and where the magic in your life awaits.

by Lily Sanders | A Narrated Excerpt From Truth To Triumph

Why Some Men Hit, and Why Some Women Stay 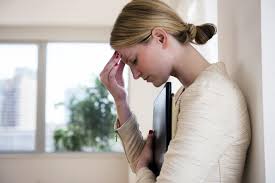 The language and belief systems that we have been taught about domestic abuse has clouded the truth for generations upon generations. Lets clear up the misconceptions that most have learned growing up. As adults, we have latched onto these falsities as truth.

The belief system about domestic abuse tells you it takes two to tango. In truth, it does not. In my human experience, what I have learned is that most humans operate as computers. When the system malfunctions, or runs slow…. we either blame the internet service or fear that we have a virus and may crash. We never see ourselves beyond the hardware and the software. We hook up, we download, we upload, we store data, we delete data, we back up files, and then one day we just crash. When this happens to someone who has very heavy emotional pain from past experiences in their energy field, he or she will take down everything and everyone with them. All of the things that seemed important and critical in life vanish and not a single loving person in their world can re-boot them. Everything that has been stored in his or her brain eventually crash, and the entire way down they blame, accuse, misuse, abuse, and torment the very person that has loved them all along.

Emotional pain is the cause of many people’s addictions to alcohol, painkillers, recreational drugs, and violence. When you see domestic abuse you will also see addictions. They are all forms used to mask the pain. The problem is that it will only numb the pain temporarily, and yet the rubber band effect becomes far worse. Once the abuser snaps back to a more conscious state of mind they don’t know how to be present. They are completely identified with their past emotional pain. The ego tells them they are in danger, and so they keep up the addictions, and the bouts of anger and violence become heightened.

Domestic abuse needs no provoking from their victim. They have plenty of reason all on their own, wrapped up in a painful package called pandemonium. When a person is running on just their brain, the ego becomes their master. The brain then crashes just as a computer does. The brain crashes because it is not hooked up to the main server. They have forgotten the Source in which they came into this world from.

Domestic abuse does not honor love. Our body was designed to honor love, so much so that the very doorway from Divine Oneness into this physical world on earth is created by physical love. It is the only way to get here. The truth is, our bodies are programmed in the womb before the mind ever touches them and before society adjusts the bodies to its own fearful conditioned mind patterns. This is why in my book, “Truth To Triumph”, I write about the importance of connecting the heart, intuition, and the brain. And yes, our bodies are designed to dance…but they are designed to dance with the love and lightness that allows joy to enter. Dance is supposed to bring you joy.  Anything other than this is not love.

The second myth is that the victim and their abuser are turned on by make-up sex. Domestic abuse and make-up sex are not even on the same planet. This is a gross misconception. Here is the only analogy that comes to mind: Imagine that you are served lamb chops for years and really enjoy the tenderness. Then one day you see the chef out back. He slaughters the little young intelligent lamb by stunning it. The method of stunning for the slaughtering of lambs and sheep is done worldwide. It involves the use of electric paddles placed on the animal’s head, a shock given which results in convulsions in the lamb, and subsequently becomes unconscious, which is by no means effective or humane. There is no sense of human-ness present in this act, whatsoever. Next, you see the chef slit its throat open in order to sever the arteries and the animal is bled out. An hour later, the chef comes in with this beautifully cooked lamb chop on a dish. Would you want to eat it?

In domestic violence, the continuum of unloving acts in a relationship creates a gulf between the two. The physical loving that was once there can no longer exist.  It cannot exist because physical loving is always an expression that honors love. You cannot hit and name call one minute, and expect to be on cloud nine with that same person a few hours later. The very idea of that concept is pure madness. This deranged thinking is not only a complete disconnect but is also a form of mental illness which goes undiagnosed in many abusers.

Love does not have a beginning and an end. It is not an act of doing that only takes place in the bedroom on command. Love is a state of being. When you honor love, it will follow through with a physical loving. When that relationship is void of honor outside of the bedroom, lovemaking becomes less desirable and is never been used as a ‘make-up’ tactic. In actuality, instead of feeling loved, the victim feels bemused and disoriented…lost in thought throughout the physical experience.  Sometimes that confusion will linger for days, while the abuser exhibits no sign of confusion whatsoever. It is a domestic abuse nightmare.

Women Do Not Want to Suffer

The third misconception is that people stay with their abuser because deep down, they want to suffer. The truth is, they stay because they are afraid. They are still believing fear. Victims fear for their physical mortality and that of their loved ones. However, at a much deeper level, they also fear their own evolution. They believe what they are being told by their abuser, and they believe their own negative thoughts as well. These victims have not yet recognized these fears as an illusion, which is all they ever are.

Because of this, they are not ready for the shift, from thought into awareness. Ego still has a firm grasp on them. Additionally, a battered person is typically alienated from family and friends, or have mastered the secret so well that it becomes extremely challenging in their reaching out for help. Especially when the domestic abuse is in an affluent household, or with a celebrity, someone in the public eye, or a professional like a doctor or attorney. Who will ever believe them?

This is what fear tells them. So they go on living behind a veil of silence until they can no longer stand the suffering…or are found dead and on the front headlines of the News.

Awaken from the Nightmare

On a positive note, when a person is ready for the shift in awareness and the remembrance of love, that awakening will birth an intense sense of peace. You will be able to honor your past pain as teachers in this schoolroom of life. Remember, it is not the unhappy story we are relating to, rather the truth in how our own unique pain and suffering around the globe, at whatever intensity they may be, are all reminders that pain and suffering is not our individual burden.

The recognition of this can help you discover who you are, which will always bring you back home. When I speak of home, I speak of love. The core of your very being where that infinite love and light wraps you with magic. This is the power and wisdom that emerges from within. This is your gift that can never be taken from you. Not in shame, nor fear. Not in regret, nor disappointment.

You have done nothing wrong. Every decision you made and each experience you had is what brought you to this moment. Welcome. This invitation is to awaken from the domestic violence nightmare.